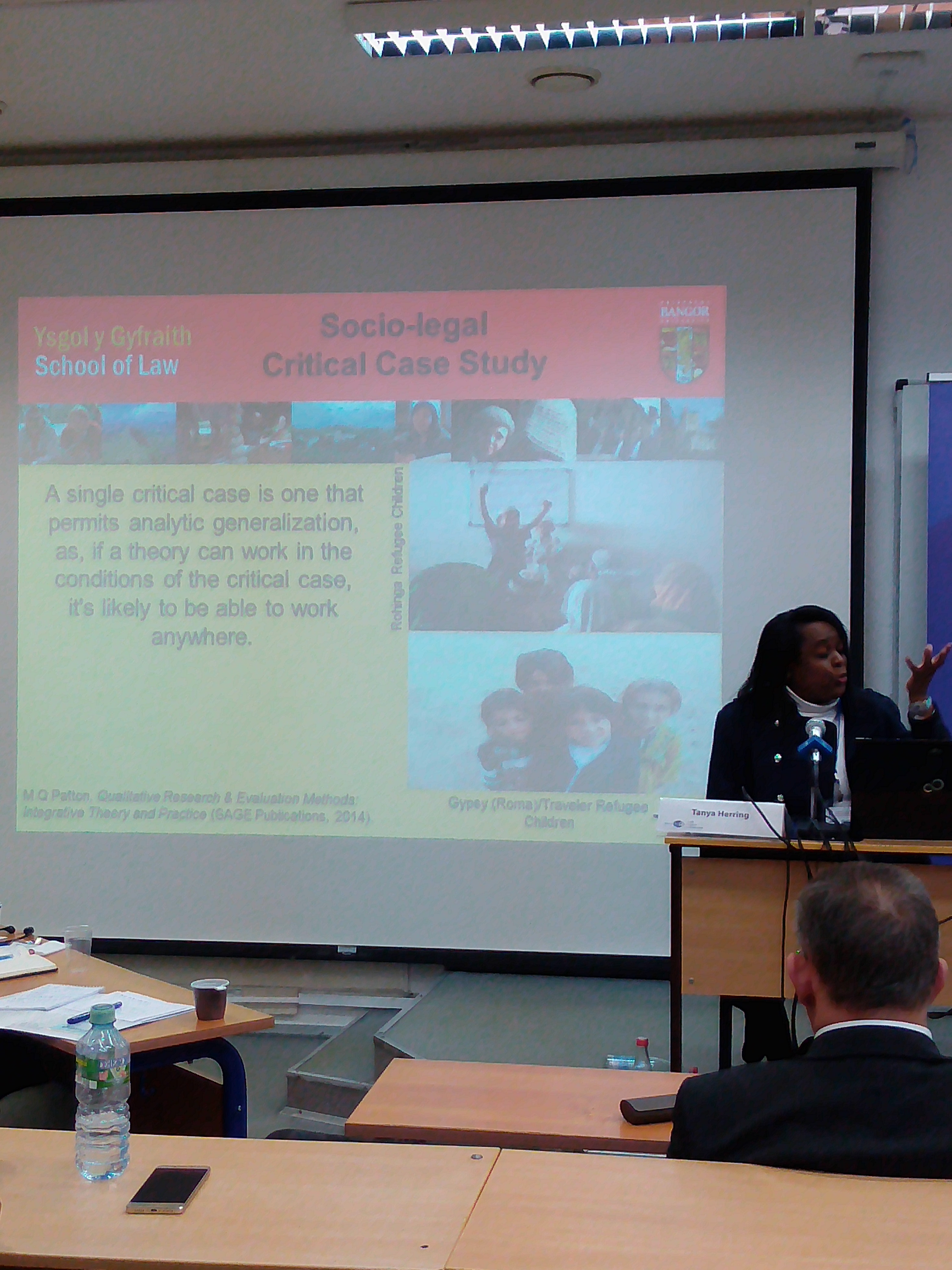 A panoply of experts and scholars discussed issues on how to understand and react to migration on the local, national, and continental scales. Moreover, the miscellany comprised of the approaches, methods, and mechanisms needed to understand and support migrating groups that are the hallmark to the excerpt of the UN’s Charter, Chapter 1 Article 1, part 2, ‘… respect for the principle of equal rights and self-determination of peoples, and to take other appropriate measures to strengthen universal peace.’ Among the diverse interdisciplinary topics, issues of primary concern included transnational migration, religion and migration, and roundtable discussions problems of access to education for the children of migrants and their own adaption in schools. Each focal point can be construed as a concatenate to the United Nations’ conceptual perspective of self-determination and legal empowerment of the poor and eradication of poverty.

Using a formal invitation from the National Research University, I was able to obtain a humanitarian visa that allowed my participation in the colloquia is addressing challenges, incongruous reception of many migrants, and the acrimony in communities across Europe. Forum discourse centered on children of migrants and integration of migrants, as well as religion and migration. Speakers from the Hellenic Ministry of Education, Research and Religious Affairs, Bordeaux University, and Moscow State University (Lomonosov Moscow State University) presented case studies that addressed avenues to promote the adaptation of migrant children, inclusion measures, coupled with education policy and practices targeted toward children of immigrants.

Another phylum talking point from speakers included ‘Integration of Migrants’ with speakers from again Bordeaux University, France’ topic: ‘Integration Processes in Practice: Grassroots Organizations Helping Migrants in Bordeaux, Aarhus and Bilbao’; the School for Advanced Studies in the Social Sciences, Paris’ topic: ‘Social Ties and the Mystical Link. Religion’s Role in the Creation of Private Solidarities among Moldovan Immigrants in the Parisian Region’; the Northern Arctic Federal University and the University of Bologna’s topic: ‘Facing the Challenges of Migrants’ Integration and Adaptation in Italy and Russia: Networks of Intercultural Centres’; the Institute of Ethnology and Anthropology, Russian Academy of Sciences’ topic: ‘The Influence of Migration on Local Muslim Religious Organizations in the Moscow Region’.

Case Study. The aim of my field-research presentation is to illustrate the Rohingya population in Southeast Asia as a critical case study, which yields the most information and theoretically has the most significant impact on knowledge development. The human rights viewpoint encompasses prevention and protection measures for forced-migrants, exiled, and vulnerable groups with the need for legal empowerment as a pathway to peaceful self-determination. The basis strongly relies on literature that shows refugee children meet the ‘vulnerable’ definition; subsequently these children are highly susceptible to all forms of exploitation during forced-displacement and Member States have an obligation to exercise extra protection measures.

As a single-critical case study, my research permits analytic generalization. Therefore, as a theory that follows the realms of medical science, whereas replicable (empirical) remedies applied to address the case study problems has a high propensity to work in similarly situated conditions of the critical case anywhere (geographically). This concept is metaphorically grounded in the plight of the Rohingya being patient-zero and the treatments, remedies within the rule of law, should be applied to the Rohingya situation and replicated in other analogous cognate situations throughout the globe. My field research further supports the premise that legal empowerment of the poor can be implicit as the process of systemic change through which the poor are protected and enabled to use the law to advance their rights and their interests as citizens and economic actors. The outcome of my research is structured to create an open-access human trafficking resource tool for practitioners to draw upon as active solution-oriented participants within the systemic change.

In recent news, Zeid Ra’ ad al-Hussein, the UN High Commissioner for Human Rights, compared the treatment of the Rohingyas to a ‘textbook example of ethnic cleanings’. With this example portrayed from the highest echelon of human rights, the atrocities that have been placed upon this population has been compared in the realm of international law. Conjunctively, I conveyed that the Responsibility to Protect (R2P) is a principle aimed at the protection of the world’s most vulnerable populations from the most heinous international crimes: genocide, war crimes, ethnic cleansing and crimes against humanity. There are similarly situated groups of exiled populations in Europe experiencing some of the same atrocities occurring in Southeast Asia. I ascribe that there are prescriptive measures within international law to protect these populations, especially the children.

Further, I ascribed that the origin of the R2P principle prepared by the International Commission on Intervention and State Sovereignty (ICISS) in 2001 entitled ‘A Responsibility to Protect’ focused on the responsibility of States to protect their own populations, but recognized that when a State was failing, or unwilling to protect its own people, then the international community had a responsibility to do so with conflict as a last resort. Subsequently, the accountability ties authorities to their populations and individual States to the international community. In the General Assembly Seventy-first session Agenda items 13 and 117, which is not a legal binding document in international law, the report outlines practical steps that can be taken by Member States, intergovernmental bodies and the United Nations system to strengthen accountability for the prevention of atrocity crimes that appear to formulate a nexus with forced-displaced migrants and their children. The Human Rights Council has adopted more than 20 resolutions that refer to the responsibility to protect. In 2016, it called upon all Member States to work to prevent potential situations that could result in atrocity crimes and, where relevant, to address the legacy of past atrocities to prevent recurrence. The forced migration plight of the Rohingya population has brought these issues to a surface that presents a broad surface application. Visually depicted, forced migration, statelessness, and human trafficking form a tripod of linked international law prevailing issues.

Currently, to address the many challenges around forced migration there are treaties and conventions that are ratified, well adopted among the sovereign states, and long-established, but with gaps still in some Member States, to include the 1951 Refugee Convention and the 1967 Protocol relating to Refugees, the 1954 Convention relating to the status of Stateless Persons, 1961 Convention on the Reduction of Statelessness, and the United Nations Convention on the Rights of the Child, among others. Statelessness and human trafficking are grave and widespread human rights problems which the international community is committed to tackling.

Unlike many other groups I address, many in the audience had never heard of the Palermo Protocols and definitely had no understanding of the Responsibility to Protect (R2P) or Responsibility to Prevent (R2Prev) principles. Similarly, no one in the audience shared that they had prior knowledge that Russia had ratified the Palermo Protocol.   I aver the international legal framework approach is to gainfully employ the laws surrounding human trafficking that are articulated mainly and outlined in the Protocol to Prevent, Suppress and Punish Trafficking in Persons, especially Women and Children, supplementing the United Nations Convention Against Transnational Organized Crime (the “Protocol”). The Protocol takes a three-pronged approach to trafficking, known as the ‘3- Ps’: (1) criminalizing and ‘P’rosecuting the act of trafficking, (2) trafficking ‘P’revention programs and (3) aid (or ‘P’rotection) for victims of trafficking. Member States have an opportunity to optimize the use of resources for aid and prevention, primarily by focusing on the criminalization mechanisms to aid in deterring human trafficking.

The principal claim of my presentation is that legal empowerment is rooted in a human rights-based approach to development, which recognizes that poverty results from disempowerment, exclusion, and discrimination. Modern international law, which is often referred to as a jus cogens rule, is a cardinal principle of self-determination and the right to freely choose their own sovereignty and international political status without interference. The Rohingya, unlike other similarly situated isolated groups have similar general characteristics: poor, uneducated, experience forced-displacement, and experience a high propensity to the vulnerability of atrocities as they seek self-determination. As such, States Parties to the Protocol have a transnational duty to prevent human trafficking, and under the Protocol, Member States have a shared responsibility, and this responsibility extends past national borders.

With the Rohingya population’s constant presence in the news, my feedback and inquiries centered on remedies and resolved. I encouraged eastern Europeans to relate the Rohingyas to similarly situated isolated populations in our geographical area. The dual-prong takeaways to the audience from my field-research are to 1) promote the State’s responsibility to‘P’’revent and ‘P’rotect against atrocities and 2) Legal empowerment can and should be used as a pathway to the UN’s concept of self-determination.